Virtual Reality is a fascinating subject.

We have believable virtual reality now, thanks primarily to cellular phone advancement.

The resolution is realistic enough to trick your brain (even if only for a second) that you are somewhere else.

If it succeeds in tricking you and you allow yourself to experience “presence”, one really can begin to understand why many are beginning to get extremely excited about this technology.

Popular culture worked off the theme of virtual reality since the 1980s.

Films like Tron and the Matrix inspired the cultural idea of a simulated universe.

This idea has permeated the social conscious of video games since it’s inception.

We saw some failed attempts, but this was due to the technology not being advanced enough to be actually usable.

Devices like the Power Glove and the Virtual Boy were extremely ambitious ideas, but now the technology has improved significantly and I think that now is the perfect time for smart clothing.

Because of this new technological advancement, a novel has appeared that has helped re-spark public interest in VR.

Ready Player One is a novel adapted into a film by Steven Spielberg in 2018.

It was written by Ernest Cline.

He wrote the screenplay for Fanboys.

I read Ready Player One back in High School.

A Globally Connected Virtual Reality MMORPG named OASIS was the main backdrop for the story.

We are extremely close to achieving this in our actual society.

While it may take a bit for it to really catch on, VR is close to the endpoint for complete immersion.

In fact, I think that I can convince you that we may be able to create this simulation ourselves over the span of the next twenty years.

Here is some background on the growth of VR recently 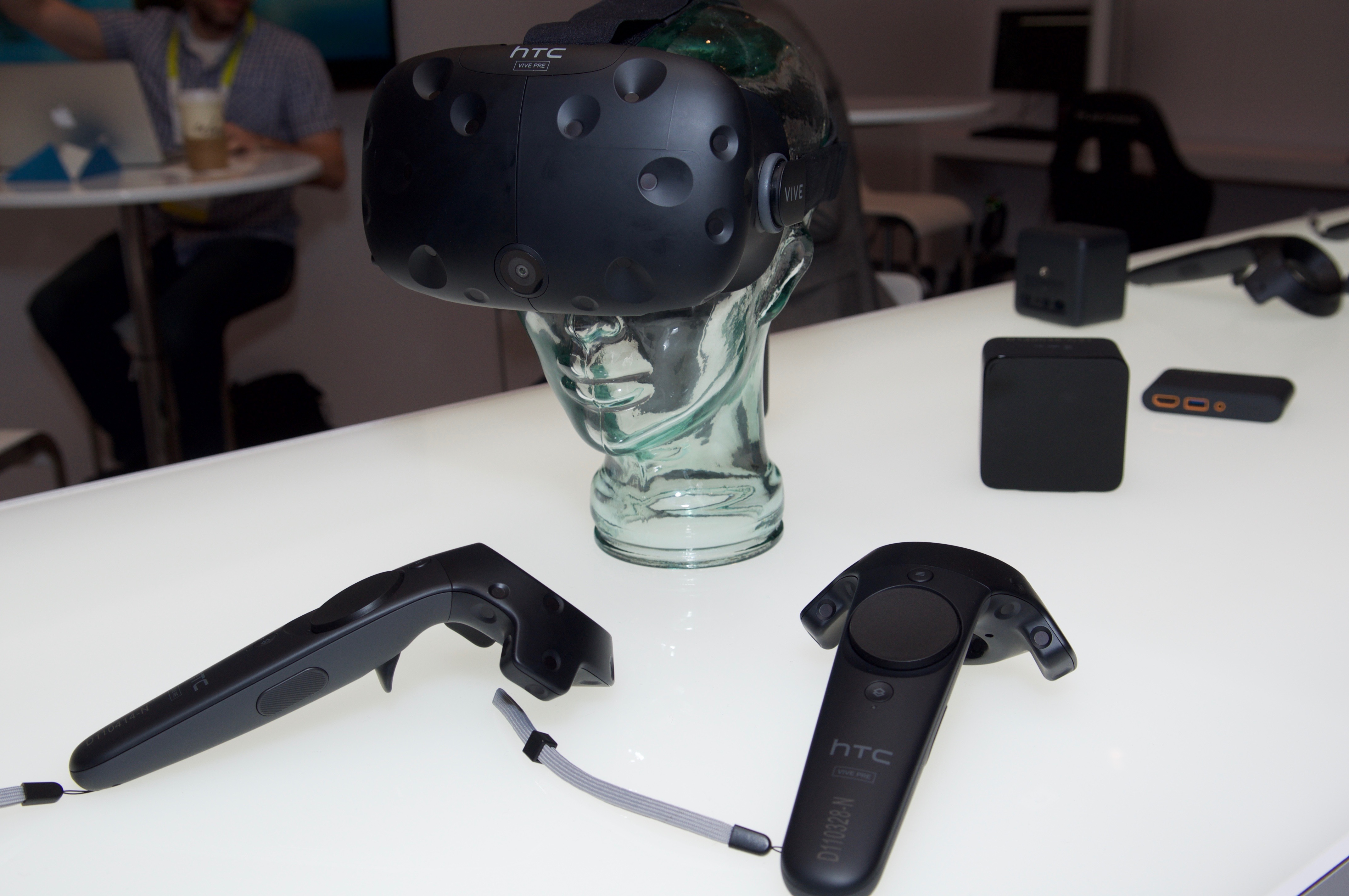 I tried this one. Wonderful.

For those who are unaware of the improvements that have impacted VR,

the two devices above this bit of text are called the Oculus Rift and the HTC Vive.

They are the current two largest adopted forms of VR.

The current price points for these headset systems are far too high for anyone not ready to jump on the bandwagon.

A bit much for the average consumer, especially if you factor in the price of upgrading the components in your PC to run the thing.

After testing out the HTC Vive on several occasions, I know for certain that believable VR can be achieved with current hardware.

While I have yet to experience the Rift, I do believe that the second generation of these products will be the major tipping point.

It would be ridiculous of me to assume that a new form of the HTC Vive or Oculus Rift would come out this year.

I do believe that a price reduction in both of these devices will happen soon.

Hitting under $500 seems to be the best for a larger adoption rate, but that will be difficult for the HTC Vive.

The 2nd generation of these headsets will be have quite noticeable improvements.

Foveated Rendering based on Eye-Tracking in the headsets doesn’t sound like a bad way help reduce the amount of stress placed on graphics cards.

By not rendering the entire frame at ridiculously high resolution, foveated rendering allows the graphics card to render only what an individual is focusing directly at. Combined with eye-tracking, the benefit of this type of rendering system is easily noticeable.

Extremely high resolution is placed on the specific thing that the user is looking at. Credit to Roadtovr.com for this image. I’m just trying to help explain a concept.

This allows users with less powerful machines to play games with fast framerates and believable graphics.

Moving forward, I can see VR making quite an impact with how we interact with computers.

Giving users access to development tools seems to be the best option.

Give the players the tools, and they will create.

There you go. You made a game that doesn’t stop growing.

The textures that we use need to be free and easily applied.

Anyone can make and share models and textures that they can throw anywhere in a virtual world.

Perhaps allowing users to select any bit of any image to use as a texture is a good way of thinking.

Garry’s Mod is one of my favorite games to think about when I think of the future of VR.

The communities and mods that will form with these devices will be fascinating.

Public excitement will be at it’s peak for VR over the next few years.

Valve’s work on the Source 2 engine integrating VR certainly looks to be a logical assumption.

The release of a Ready Player One film in 2018 will re-iterate VR when it releases.

Samsung’s Gear VR and Google Daydream are just the beginning.

Virtual Reality is finally able to become a major player in terms of home media, mainly because the applications to this type of technology are virtually (heh) limitless.

Here is an animated GIF of my friend testing it out.

As the screen resolution increases and rendering power becomes cheaper, most VR-Based applications will become almost indistinguishable from reality.

A fun application I tested in VR is TiltBrush by Google.

Think of a three-dimensional design application that works like a strange mix between Microsoft Paint and Adobe Photoshop.

The program allows you to paint and draw in 3D space, all easily layered and set in a virtual design studio.

Here are some pictures ->

I had a great bit of fun designing these.

The program was easy to adjust to the controls and I got quite the arm workout after working in VR for a little over an hour designing these.

What you can’t see in these pictures is that all of the designs were animated.

I was unable to save the animations, as it only allows for JPEG screenshots.

That seems pretty counter-intuitive and I strongly urge Google to update the program to allow for animation recording.

Exporting the files as GIF timeframe snapshots would be a nice addition to a fun design program.

I also had the chance to try Vivecraft.

It is a mod that allows Minecraft to be played in VR.

I spent two hours in the game and I could definitely see myself playing it more in the future.

Now let’s switch focus and talk about what’s coming next.

To do that, let’s take a look at Valve. A private company that helped develop the HTC VIVE.

Valve is known for its developed PC games like Half-Life, Portal, Team Fortress, Counter-Strike, Left For Dead, and others all placed on their storefront Steam.

Steam is a program that catalogues your PC games and updates them for you. It also stores programs and films now. Big surprise.

I can only begin to imagine how far this medium will grow with the next few years.

Steam as a service will expand quickly as more and more users see the benefit of PC gaming.

While some find issues with Valve, it can not be denied that Steam’s existence was needed.

Before it’s existence, users had to install constant firmware updates to individual games.

It was a large hassle and Steam streamlined the process by having the updates install automatically.

Steam (and Valve itself really) will use the profits it’s gained to help develop the space for the future of VR.

Science fiction novels propelled millions of readers to imagine societies with better and faster technology, and in doing so engineers, mathematicians, scientists, philosophers, programmers, architects, and builders all grew to dream of this advancement. It was the spark for their imagination.

VR can be the future

A connected world. That is what we will become. Every user will have a voice. One that can be easily traced back.

It will be quite fantastic.

Virtual Reality headsets are quite an amazing achievement in human history.

Video games should not be the only reason for VR to exist though.

While amazing forms of artistic expression, video games are just the tip of the iceberg.

Projects that are easily editable and instantly rendered.

The amount of time that it takes to present new ideas to the entire connected world will become almost instantaneous.

These designs could be printed out and manufactured locally thanks to the rise of 3D printing.

They also could be easily rendered in VR for scale, size, and gravity before actually being built.

VR is certainly the future.

We may not be there quite yet, but this isn’t toy tech.

It is past the point of no return.

There is enough money placed in improving VR development for it to continue as a field.

It is now too large and exciting to really die out, like it did in previous decades.

This post will be the first in hopefully a long string based on this topic.